Back in the 1890s those who believed conquering a continent was killing enough (without taking over Hawaii, the Philippines, Cuba, Puerto Rico, etc.) included Speaker of the House Thomas Reed. He clipped an article out of a newspaper about a lynching in South Carolina. He clipped a headline about “Another Outrage in Cuba.” He pasted the two together (fake news!) and gave them to a Congressman from South Carolina who was pushing for a war on Cuba. The Congressman eagerly read the article, then stopped, looked puzzled, and remarked “Why, this isn’t Cuba.” 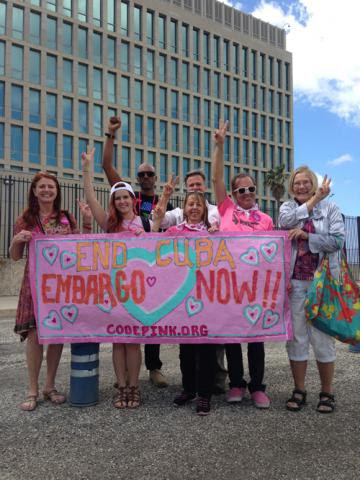 I recommend trying this trick. Clip an article about Israelis murdering Palestinians, or some outrage in a U.S. prison or a Saudi square or under the rain of humanitarian bombs in Afghanistan, Pakistan, Syria, Yemen, Somalia, Iraq, Libya, or elsewhere; paste it below a headline about Iran, North Korea, Bashar al Assad, or Vladimir Putin. Show it to the person closest to your Congress member or senators with whom you are able to get into the same room or reach by email. Or just show it to someone who has the misfortune to own a television.

Outrages should be outrages because of what they are, not because of who commits them. Good luck finding that to be the case in the United States today!

Here’s an excerpt from my new book, Curing Exceptionalism:

In exceptionalist nationalism, as perhaps in all nationalism, “we” are to adopt a first-person plural identity alive for centuries, so that “we fought the British” and “we won the Cold War.” This self-identification, especially when combined with the belief in exceptional superiority, inclines the believer toward focusing on noble things “we” did, and away from shameful things “we” did, even though personally he or she deserves neither credit for the former nor blame for the latter. “The nationalist,” wrote George Orwell, “not only does not disapprove of atrocities committed by his own side, but he has a remarkable capacity for not even hearing about them.”[i]

On page 1 of the Cheneys’ book: “We have guaranteed freedom, security, and peace for a larger share of humanity than has any other nation in all of history.”[ii] Such claims are, as here, generally not footnoted or explained. In the context of what follows it, the claim seems based largely on an analysis of World War II as the promotion of freedom and peace, and on a history of World War II that leaves out the lion’s share of the Allies’ fighting in Europe that was done by the Soviet Union.

The claim that “we” are the leading bringers of peace and freedom may, of course, also be based on U.S. wars and weapons production since World War II. Certainly, if whoever fights the most wars and produces the most weapons brings the most peace and freedom to the earth, then the United States takes the title. But outside the United States, this logic is far from universally accepted — quite the contrary. Most countries polled in December 2013 by Gallup called the United States the greatest threat to peace in the world.[iii] A survey by Pew in 2017 found similar results.[iv]

Since World War II, during what some U.S. academics think of as a golden age of peace, the U.S. military has killed or helped kill some 20 million people, overthrown at least 36 governments, interfered in at least 84 foreign elections, attempted to assassinate over 50 foreign leaders, and dropped bombs on people in over 30 countries.[v] The U.S. military costs nearly as much as the rest of the world’s militaries combined, while the U.S., NATO members, and their allies account for three-quarters of the world’s military spending. U.S. weapons dealing is exceptional in the sense of leading all others, but quite inclusive in terms of its clients. The United States, as noted above, as of 2017 provided weapons and in most cases training to 73 percent of the world’s dictatorships.[vi] It is certainly possible to find good results from some of this, but a clear-eyed understanding requires weighing the good against the bad. Is the globe that fails to appreciate all of this global policing made up of a bunch of ingrates? Or is the policing model seriously flawed?

Avoiding national criticism, or self-reflection on “us,” risks allowing generosity to serve as a cover for a double standard. What might Americans think if another nation were to do some of its own freedom-promoting around the world? Such would be the behavior of a “rogue nation.” Here is a count of military bases in the world that exist outside their nations’ borders:[vii]

In 2007, the president of Ecuador told the United States that it could keep its base in Ecuador as long as Ecuador could have one in Miami, Florida.[viii] The idea was, of course, ridiculous and outrageous.

Of the United Nations’ 18 major human rights treaties, the United States is party to 5, fewer than any other nation on earth, except Bhutan (4), and tied with Malaya, Myanmar, and South Sudan, a country torn by warfare since its creation in 2011.[ix] Is the United States functioning as the world’s law enforcer from a location outside the world’s laws? Or is something else going on?

That the United States has done something should not weigh for or against that thing. Actions should stand or fall on their own merits. But the Cheneys tell us we must see a “moral difference between an Iranian nuclear weapon and an American one.” Must we, really? Either risks further proliferation, accidental use, use by a crazed leader, mass death and destruction, environmental disaster, retaliatory escalation, and apocalypse. One of those two nations has nuclear weapons[x], has used nuclear weapons[xi], has provided the other with plans for nuclear weapons[xii], has a policy of first-use of nuclear weapons[xiii], has leadership that sanctions the possession of nuclear weapons[xiv], and has frequently threated to use nuclear weapons[xv]. I don’t think those facts would make a nuclear weapon in the hands of the other country the least bit moral.

If you’re wondering, U.S. presidents who have made specific public or secret nuclear threats to other nations, that we know of, have included Harry Truman, Dwight Eisenhower, Richard Nixon, George H.W. Bush, Bill Clinton, and Donald Trump, while others, including Barack Obama, have frequently said things like “All options are on the table” in relation to Iran or another country.[xvi]

David Swanson is an author, activist, journalist, and radio host. He is director of WorldBeyondWar.org and campaign coordinator for RootsAction.org. Swanson's books include War Is A Lie. He blogs at DavidSwanson.org and WarIsACrime.org. He hosts Talk Nation Radio.He is a 2015, 2016, 2017 Nobel Peace Prize Nominee.