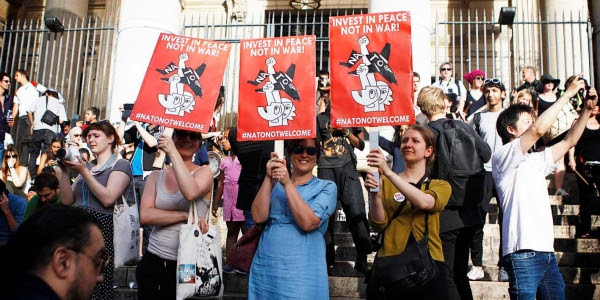 The weekend of July 7th and 8th witnessed the European peace movement come together in Brussels, Belgium to send a clear message to the world community, “No to war – No to NATO!”

The mass demonstration on Saturday and the No-to NATO counter summit on Sunday rejected American calls for all 29 NATO member states to increase military expenditures to 2% of GDP. Currently, the US spends 3.57% for military programs while European nations average 1.46 percent. President Trump is pressuring NATO members to spends hundreds of billions of additional Euros annually on various military programs, many which involve the purchase of American weapons and the expansion of military bases.

NATO members will meet in Brussels on July 11th and 12th. President Trump is expected to come down strongly on the Europeans while most member states are hesitant to increase military spending.

Reiner Braun is the Co-President of the International Peace Bureau, (IPB),  and one of the organizers of the Brussels counter-summit. He said increasing military spending is “a totally stupid idea.” Braun reflected the beliefs of most Europeans by saying, “Why should the European countries spend billions of dollars for military purposes, when we need money for social welfare, for health care, for education, for science? It is the wrong way to solve global problems.”

Saturday’s demonstration, which attracted about 3,000, and Sunday’s counter-summit, which drew 100 representatives from 15 NATO member countries and 5 non- NATO states, came together over four points of unity. First – a rejection of the 2%; Second – resistance to all nuclear weapons, particularly the production and deployment of the new American B 61-12 “tactical” nuclear bomb; Third –  a condemnation of all arms exports; and Fourth – A call to ban drone warfare and what they call the “robotization” of war.

Participants seemed to agree that the lowest-lying fruit for the peace community is the eradication of nuclear weapons from the continent. Currently, American B 61 bombs are ready to be dropped from aircraft launched from military bases in Belgium, the Netherlands, Italy, Germany, and Turkey. Many of these weapons are 10-12 times larger than the bomb that destroyed Hiroshima. Russia is the presumed target today. A deep irony was apparent on Friday night in Brussels when the Belgian football team defeated the Brazilian team during the World Cup Quarter-finals in Kazan, Russia. Belgian television widely reported that the Russians have been gracious hosts. European opinion polls reflect a European population that is overwhelmingly opposed to these American weapons on European soil.

Ludo de Brabander, a leader of Belgium’s Vrede peace organization, said nuclear weapons continue to lose support while Belgians, and inhabitants of the vibrant and beautiful city of Brussels have no love for President Trump. After all, Trump said during his campaign that the great city was “like living in a hellhole.”

The antiwar activists also believe that it is possible to convince NATO member- states to leave the alliance. De Brabander framed it this way, “Why do we need NATO? Where are the enemies?”

Indeed, the alliance outlived its initial objective which was, ostensibly, to contain the Soviet Union. When the Soviet Union collapsed in 1991, rather than advocating for peaceful co-existence, the US-led NATO military club gradually expanded to Russia’s border, gobbling up nations to Russia’s border.  In 1991 there were 16 NATO members. Since then, 13 more have been added, bring the total to 29: The Czech Republic, Hungary and Poland (1999), Bulgaria, Estonia, Latvia, Lithuania, Romania, Slovakia and Slovenia (2004), Albania and Croatia (2009), and Montenegro (2017).

The No-to-NATO organizers ask us all to take a moment to see the world from the Russian perspective. Reiner Braun captures this sentiment, “NATO is developing confrontational politics against Russia. They have always done this, and this is definitely, absolutely, the wrong way. We need cooperation with Russia, we need dialogue with Russia; we need economic, ecological, social, and other relations.”

Meanwhile, on July 7, 2018, the International Campaign to Abolish Nuclear Weapons (ICAN) marked the one-year anniversary of the United Nations Treaty on the Prohibition of Nuclear Weapons, (TPNW). The Nuclear Weapon Ban Treaty is the first legally binding international agreement to comprehensively prohibit nuclear weapons, with the goal of leading towards their total elimination. 59 countries have signed the treaty.

Preparations are being made by European and American peace groups to prepare for organized resistance to the 70th anniversary of the founding NATO in April 2019.

David Swanson is an author, activist, journalist, and radio host. He is director of WorldBeyondWar.org and campaign coordinator for RootsAction.org. Swanson's books include War Is A Lie. He blogs at DavidSwanson.org and WarIsACrime.org. He hosts Talk Nation Radio.He is a 2015, 2016, 2017 Nobel Peace Prize Nominee.