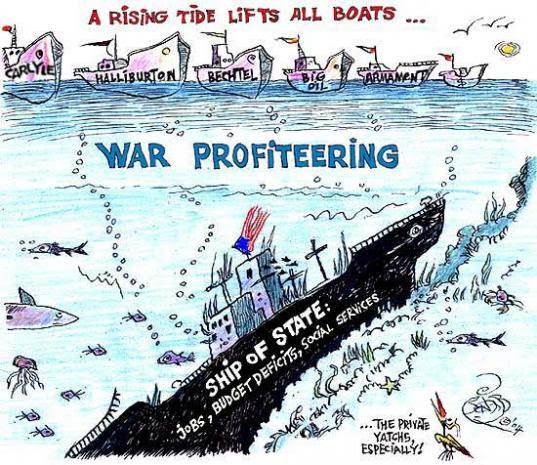 By David Swanson, World BEYOND War, May 29, 2020
https://worldbeyondwar.org/the-war-industry-threatens-humanity/

I’m adding Christian Sorensen’s new book, Understanding the War Industry, to the list of books I think will convince you to help abolish war and militaries. See the list below.

Wars are driven by many factors. They do not include protection, defense, benevolence, or public service. They do include inertia, political calculation, lust for power, and sadism — facilitated by xenophobia and racism. But the top driving force behind wars is the war industry, the all-consuming greed for the all-mighty dollar. It drives government budgets, war rehearsals, arms races, weapons shows, and fly-overs by military jets supposedly honoring people who are working to preserve life. If it could maximize profits without any actual wars, the war industry wouldn’t care. But it can’t. You can only have so many war plans and war trainings without an actual war. The preparations make actual wars very hard to avoid. The weapons make accidental nuclear war increasingly likely.

Sorensen’s book completely and refreshingly avoids two common pitfalls of discussions of war profiteering. First, it does not claim to be presenting the single simple explanation of militarism. Second, it does not suggest that the corruption and financial fraud and privatization is itself the whole problem. There is no pretense here that if the U.S. military would simply set its books straight and nationalize the war business and properly pass an audit and stop hiding slush funds, then all would be right with the world, and mass-murder operations could be conducted with a clear conscience. On the contrary, Sorensen demonstrates how the corruption and the sociopathic destruction feed off each other, generating the real problem: organized and glorified homicide. Most books on corruption in the war business read more like discussions of excess profits in the business of torturing bunnies, where the authors clearly believe that bunnies should be tortured without excessive profiteering. (I use bunnies merely to help readers who don’t sympathize as much with human beings as with bunnies understand.)

Understanding the War Industry is not so much analysis as an effort to persuade through the repetition of examples, countless examples, naming names and laid out over hundreds of pages. The author admits that he’s only scratching the surface. But he’s scratching it in lots of different places, and the result ought to be persuasive for most people. If your mind doesn’t go numb, you will feel an urge to take a shower after closing this book. When the Nye Committee held hearings in the 1930s exposing shameful war profiteering, people cared because war profiteering was considered shameful. Now we get books like Sorensen’s that expose war profiteering as a fully developed industry, one that generates the wars from which to profit, while simultaneously and systematically generating shamelessness in the hearts and minds of the people paying for it all. Such books have the task of re-creating shame, not just exposing what is already shameful. Whether they’re up to the task remains to be seen. But we ought to spread them around and give it a try.

Sorensen does occasionally stop to point out what his endless examples lead to. Here’s one such passage:

“Some people think it’s a chicken-or-egg scenario. They argue that it’s difficult to tell which came first — the war industry or the need to go after bad guys in the hemisphere. But it’s not even a situation where there’s a problem, and then the war industry comes up with a solution for the problem. It’s just the opposite: The war industry inflates an issue, avoids addressing the root causes, manufactures weaponry, and markets the weaponry, which the Pentagon purchases for use in military operations. This process is comparable to the process Corporate America uses to get you, a consumer, to purchase a product that you don’t need. The only difference is that the war industry has more incisive forms of marketing.”

Not only does this book provide endless research and documentation leading to the appropriate conclusions, but it does so with highly unusually honest language. Sorensen even explains up front that he is going to refer to the Department of War by that, its original name, that he is going to call mercenaries by the name “mercenaries,” etc. He even gives us four pages of explanations of common euphemisms in the war industry. I’ll give you the first half a page:

acquire the full range of counterspace capabilities: develop weaponry to blow up other countries’ satellites

anticipatory self-defense: Bush Doctrine of pre-emptive strike, regardless of validity of threat

“at the request of the [allied govt.], the United States is conducting unarmed reconnaissance flights accompanied by armed escorts who have the right to return fire if fired upon”: “we bomb civilians” to assure the survival of client governments

THE WAR ABOLITION COLLECTION:
Understanding the War Industry by Christian Sorensen, 2020.
No More War by Dan Kovalik, 2020.
Social Defence by Jørgen Johansen and Brian Martin, 2019.
Murder Incorporated: Book Two: America’s Favorite Pastime by Mumia Abu Jamal and Stephen Vittoria, 2018.
Waymakers for Peace: Hiroshima and Nagasaki Survivors Speak by Melinda Clarke, 2018.
Preventing War and Promoting Peace: A Guide for Health Professionals edited by William Wiist and Shelley White, 2017.
The Business Plan For Peace: Building a World Without War by Scilla Elworthy, 2017.
War Is Never Just by David Swanson, 2016.
A Global Security System: An Alternative to War by World Beyond War, 2015, 2016, 2017.
A Mighty Case Against War: What America Missed in U.S. History Class and What We (All) Can Do Now by Kathy Beckwith, 2015.
War: A Crime Against Humanity by Roberto Vivo, 2014.
Catholic Realism and the Abolition of War by David Carroll Cochran, 2014.
War and Delusion: A Critical Examination by Laurie Calhoun, 2013.
Shift: The Beginning of War, the Ending of War by Judith Hand, 2013.
War No More: The Case for Abolition by David Swanson, 2013.
The End of War by John Horgan, 2012.
Transition to Peace by Russell Faure-Brac, 2012.
From War to Peace: A Guide To the Next Hundred Years by Kent Shifferd, 2011.
War Is A Lie by David Swanson, 2010, 2016.
Beyond War: The Human Potential for Peace by Douglas Fry, 2009.
Living Beyond War by Winslow Myers, 2009.
Enough Blood Shed: 101 Solutions to Violence, Terror, and War by Mary-Wynne Ashford with Guy Dauncey, 2006.
Planet Earth: The Latest Weapon of War by Rosalie Bertell, 2001.