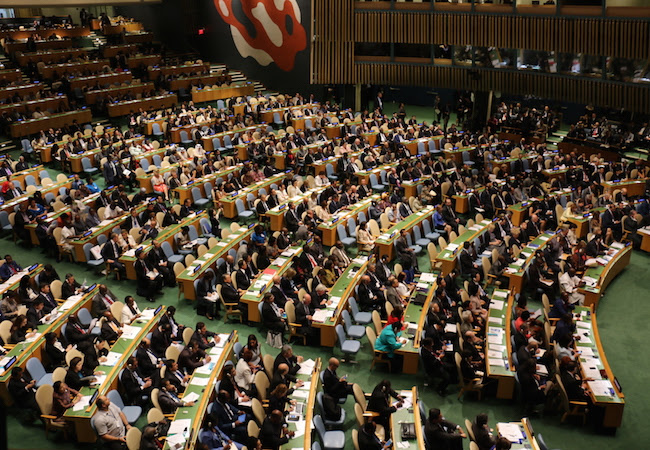 On 19 September 2016, the UN General Assembly held a one-day Summit on « Addressing Large Movements o Refugees and Migrants »  – a complex of issues which have become important and emotional issues in many countries. Restrictive migration policies deny many migrants the possibility of acquiring a regular migrant status, and as a result, the migrants end up being in an irregular or undocumented situation in the receiving country and can be exposed to exploitation and serious violations of human rights.

Citizens o the world have been actively concerned with the issues of migrants, refugees, the « stateless » and those displaced by armed conflcts within their own country.   Thus we welcome the spirit of the Summit Declaration with its emphasis on cooperative action, a humane sense of sharing the responsibilities for refugees and migrants and on seeking root causes of migration and refugee flows. There are three issues mentioned in the Summit Declaration which merit follow up action among the UN Secretariat, world citizens and other non-governmental organizations :

1) The migration of youth ;

2) The strong link between migration, refugee flows, and improving the structures for the resolution of armed conflicts ;

3)  Developing furher cooperation among non-governmental organizations for the protection and integration of refugees and migrants.

The Migration of Youth

Youth leave their country of birth to seek a better life and also to escape war, poverty, and misfortune. We should add to an analysis of trans-frontier youth migration a very large numbe of youth who leave their home villages to migrate toward cities within their own country.  Without accurate informaion and analysis of both internal and trans-frontier migration of youth, it is difficult to deelop appropiate policies for employment, housing, education and health care of young migrants  and refugees. It is estimated that there are some 10 million refugee children, and most are not in school.

Studies have noted an increasing feminization of trans-frontier migration in which the female migrant moves abroad as a wage earner, especially as a domestic worker rather than as an accompannying family member.  Migrant domestic workers are often exposed to abuse, exploitation and discrimination based on gender, ethnicity and occupation. Domestic workers are often underpaid, their working conditions poor and sometimes dangerous. Their bargaining power is severly limited. Thus, there is a need to develop legally enforeable contracts of employment, setting out minimum wages, maximum hours of work and responsibilities ;

The Association of World Citizens recommends that there be in the follow ups to the Summit, a special focus on youth, their needs as well as possibilities for positive actions by youth.

The strong link between migration, refugee flows, and improving the structures for the resolution of armed conflicts.

Developing further cooperation among non-governmental organizations for the protection and integration of refugees and migrants.

We welcome the emphasis in the Summit Declaratin on the important rôle that non-governmental organizations play in providing direct services to refugees and migrants. NGOs also lobby government authorities on migration legislation and develop public awareness campaigns.  The Summit has stressed the need to focus on future policies taking into account climate change and the growing globalization of trade, finance, and economic activities.  Thus, there needs to be strong cooperation among the UN and its Agencies, national governments, and NGOs to deal more adequately with current challenges and to plan for the future. Inclusive structures for such cooperation are needed.