“I call for Durban 2016 to mark the commitment to a new era when we finish what we started: the era of a fast-track response,” UN Secretary-General Ban Ki-moon told an opening press conference of AIDS2016.

“To end this epidemic, we must close the gaps that keep people from accessing services and living with dignity. We have to expand resources, science and services,” he added, stressing the need to protect and promote the rights of people living with HIV, gay men and other men who have sex with men, transgender people, sex workers, people who inject drugs and prisoners.

“When we do this, we can end stigma and discrimination, prevent the spread of HIV, and save lives,” he added.

The International AIDS Conference, the largest on any global health or development issue, and which meets this year on the theme of Access Equity Rights Now, was first convened during the peak of the AIDS epidemic in 1985.

The global AIDS response has since evolved, with the number of people with access to life-saving HIV treatment reaching 15 million by 2015. From 2002 to 2012, expanded access to HIV treatment averted 4.2 million deaths globally and contributed to a 58 per cent reduction in new HIV infections, according to the Joint UN Programme on HIV/AIDS (UNAIDS), a co-organizer of the AIDS conference.

However, many of the obstacles that impeded effective HIV prevention and treatment programs in 2000 still exist, with more than 60 per cent of people living with HIV remaining without antiretroviral therapy. 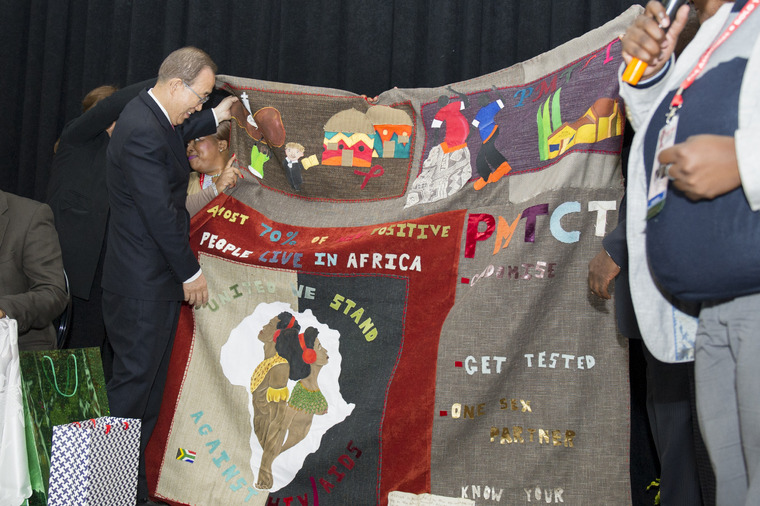 Secretary-General Ban Ki-moon (left) during the luncheon hosted in his honour by Cyril Ramaphosa, Deputy President of the Republic of South Africa. UN Photo/Rick Bajornas

AIDS 2016, which runs through 22 July, will focus on the work that remains to be done if the world is to achieve the global goal of ending AIDS by 2030.

Mr. Ban said that 16 years ago, when the AIDS conference was last held in Durban with participation from former President Nelson Mandela, less than 1 per cent of all people living with HIV in poorer countries had access to treatment and many died waiting for drugs.

At AIDS2000, Mr. Mandela had urged access to treatment, equity and human rights, calling the AIDS conference a “gathering of human beings concerned about turning around one of the greatest threats humankind has faced.” Mr. Mandela's son, Makgatho Mandela had died of AIDS in 2005.

Today, the world has proven that when we come together, we can transform lives, Mr. Ban said, noting that more than 17 million people receive treatment.

In addition medicines are more effective and less toxic, technology allows diagnosis in 20 minutes or less, generic medicines reduced the cost of treatment to just a dollar a day, and greater international finance has been made available.

“But the gains are inadequate – and fragile,” Mr. Ban warned, noting that more than half of all people living with HIV still lack access to treatment.

He said he looked forward to their report as its recommendations could affect millions of people.

“When we give them the best possible global re

sponse to AIDS, they will help build our common future,” he said.

Also today, Mr. Ban met with Cyril Ramaphosa, Deputy-President of South Africa. In addition to discussing the state of HIV and AIDS in South Africa, they discussed also the situations in Burundi, Lesotho, Mozambique and South Sudan, as well as the impact of the El Niño climate phenomenon on the region and the need to ratify the Paris Agreement on climate change.