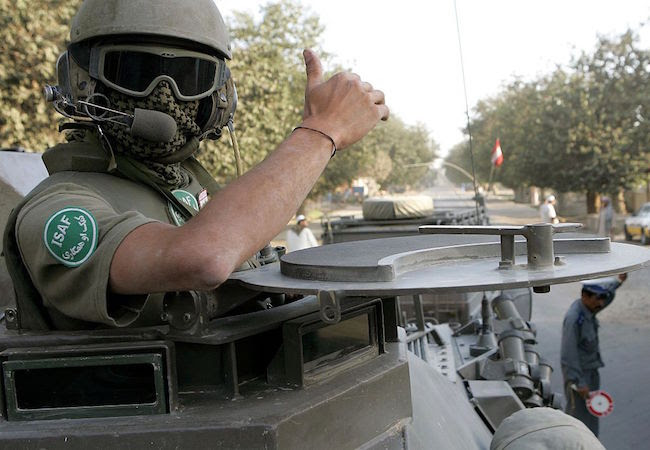 Afghanistan: From the April revolution to the August challenges

President Trump’s presentation at Fort Myer of “an update on the path forward for America’s engagement in Afghanistan and South Asia” proposing an increase in the number of US and NATO troops and giving greater possibilities for decision-making to local military commanders has again placed the Afghan situation at the center stage of US foreign and military policy.

If more troops with local army commanders able to set policy were enough to provide stability and progress in Afghanistan, the Soviet troops would still be there.  However, the decade-long intervention of the Soviet Union showed that a military approach is both costly and ineffective.

Today the USA and its NATO allies face the same challenges that faced the Soviet leaders: the regional geopolitical situation, a weak and distorted economy, an inadequate political structure. (1)

Afghanistan has always been difficult to govern and make prosperous, caught as it was in “the Great Game” between Russia and England which continued to some degree after Russia became the Soviet Union. (2)  After the Second World War, the Soviets were more concerned by events and influence in Europe during most of the Cold War period (1945-1990) than with Asia, except for its relations with China.  Afghanistan was largely a “side show” until it thrust itself into the consciousness of the Soviet leadership with the “April Revolution” of 1978.

The Saur-April Revolution in which the Afghan Communists took power was less a revolution than a palace coup in which the President Mohammad Daud was killed.  Daud had come to power in the same way in 1973 exiling the King Zahir Shaw, who was his cousin and brother-in-law to Rome.  Daud ended the monarchy and proclaimed a republic with himself as president.

One thing that the Soviet government hated in general was a national Communist Party that it did not fully control.  The experience of Tito and the Yugoslav Party was an ever-present memory.  The Afghan Communist Party had at least two major factions named after the newspaper each edited: Khalq and Parcham.  The new Communist government that was formed in May 1978 was a combination of the two factions.  The President Nur Mohammed Taraki and his then Foreign Minister Hafzullah Amin were both Khalq but bitter rivals.  The Parcham faction was represented by Babrak Karmal that the Soviets later put into power.

The government tried to put an economic policy into place, especially land reform and irrigation projects but was met by resistance from local land lords and clan chiefs who have always had a good deal of control over local villages and their surrounding areas.  The wide-spread but localized opposition increased the disagreements between Taraki and Amin who had been named Prime Minister. (3)

In September 1979, Amin killed Taraki in another palace coup and took power.  The Soviets started seriously to worry that the situation was getting out of control, that Amin might become “another Tito” and that Pakistan, considered a US ally, might take advantage of the situation to expand its influence.  The Pakistan InterServices Intelligence Directorate (ISI) has always had a heavy influence in Pakistan policy-making and had a close interest in what went on in Afghanistan.

In the last days of December 1979 Soviet troops entered Afghanistan, in theory to reply to an appeal for assistance from President Amin.  However, one of the first moves of the Soviets was to kill Amin (or to have him killed – the exact events in the new palace coup are not clear.) The Soviets put Babrak Karmal into power as a more trustworthy follower of the Soviet line.  Karmal was president to 1986 when the political-military situation was so troubled that the Soviets started to consider  to pull out. By the Spring of 1987, Gorbachev was ready to negotiate a withdrawal, even without a secure pro-Soviet regime in Kabul.  The Soviets entered into negotiations in Geneva which ultimately led to the 14 April 1988 Geneva Accord.  I had known some of the Afghans in Geneva involved in the negotiations. (4)

Najibullah (only one name) replaced Karmal and was the last of the “Socialist leaders” as the Soviets started to leave in 1988.  Najibullah was killed in 1996 as the Taliban captured Kabul after what can be considered a “civil war” among war lords from 1989 to 2001.

In December 2001, the Northern Alliance backed by the US drove  out the Taliban-led government, and since then the US is faced with the same issues which had confronted the Soviet Union.

Afghanistan is located at an Asian crossroads with the Central Asian States of Tajikistan, Uzbekistan, and Turkmenistan on the north, but with Tajiks, Uzbeks and Turkmen who live in and are citizens of Afghanistan.  The Chinese province of Xinjiang with its large Turkish-speaking population is to the east, and the Chinese government has increasing economic interests in Afghanistan.  Iran is to the west with both old cultural links and more modern political interests in Afghanistan.  Pakistan on the south shares a Pashtun population and has strong political, military and economic interests.  India is not far away and is increasingly active, in part because anything that Pakistan does interests India.  Turkey also has historic cultural links and the current Turkish government has an active foreign policy on many fronts.  Russia has strong interests in the Central Asian countries and part of the Afghan elite was educated or trained in the Soviet Union.

It is not clear that a regional security conference with the Afghan government, the US and each of the interested countries would be the best way forward.  At a minimum, there needs to be serious bilateral discussions so that each State feels that its interests are being taken into consideration and that none are being unfairly favored.  There are other than Afghanistan issues with each of these countries, and subtle diplomatic discussions among these States are needed, though subtle diplomacy is in short supply these days.

The ongoing armed conflicts and refugee flows from Afghanistan, especially of younger and more educated persons, have  weakened an already weak socio-economic infrastructure.  The monetary economy is focused on a small number of cities often on historic trade routes.  The rural areas remain under the control of clan chiefs and  larger land holders and increasingly under the control of war lords and armed factions.  The one flourishing economic sector is the opium drug trade but which is destructive of the lives of people. Russia, Iran and Pakistan are seriously hit.  However drug trade substitution is never easy. There are entrenched  interests, and substitute crops often require more work for less income. It is difficult to develop a prosperous economy without political stability.

Afghanistan is a country of great cultural diversity and a wide range of local conditions.  Therefore, political and social decision-making must be made at the most local level possible.  There should be policies of local self-reliance based on existing regional and ethnic structures.  Such local self-government will mitigate against the “winner-take-all” mentality of centralized political systems.  All governments directed from Kabul, no matter what the ideological tendency, have met resistance from some provinces or areas.  Decentralized structures of government will be a recognition of local diversities.

Nevertheless, there must be an active central government with an overall view of socio-economic planning and initiatives. There needs to be a central diplomatic service to deal with neighboring States.  Finding the right balance between local initiatives and decision-making and a central government that can provide a vision and motivation for concerted action has not been found in the past and will require a good deal of discussion, compromise and a willingness to work for the common good.  There is a need for creativity on the part of Afghans but also from those of us on the outside who want a peaceful and stable Afghanistan.